Get the Bunny proofing book!
All the advice you need in a handy guide
Buy it on Amazon
Bunny enclosure gallery

Edison is an approximately 2 year old English Spot who has been with us since Feb 2019. He was supposed to be a foster for 8 weeks. I failed! 3 weeks after returning him to the shelter, I went to visit him and realized that I missed him too much. I brought him back home that very day.

He is a character and we can't get enough of him!! He doesn't like to be held but he shows his affection by jumping into my lap and giving me bunny kisses on my nose every time he sees me. He loves his Small Pet Select treats and an occasional cranberry (I call cranberries bunny crack!) He responds to basic commands such as Edison up Edison pen time or Edison bed time. He is so smart! 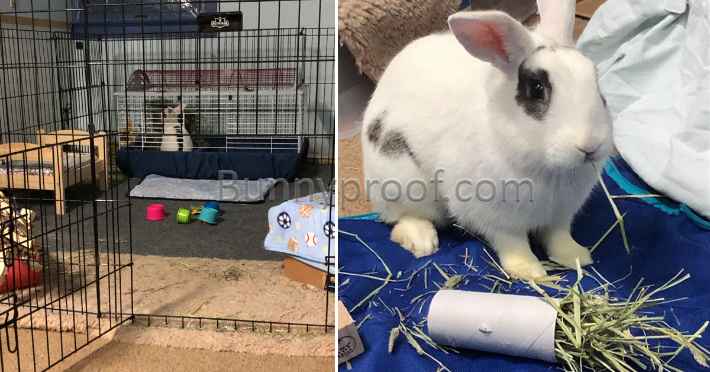 The Living World cage was his shelter cage and where he was litter trained. I intended to only leave it temporarily, but he still spends time in it so the cage remains. His litter box and hay rack are still in there. The bottom is covered with a baby crib sheet. He often stretches out in there to rest. The door is always open. 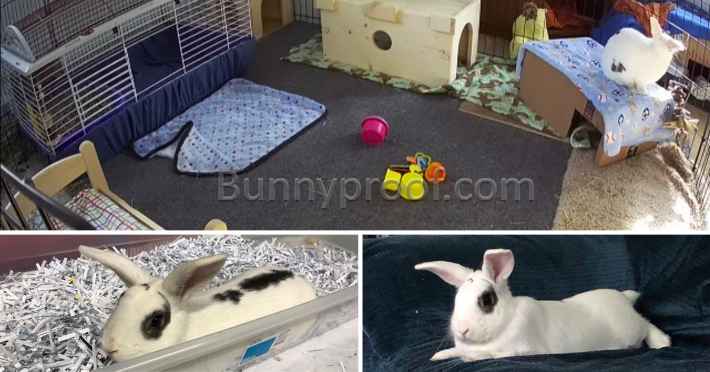 How the enclosure was built

His full enclosure is made up from the panels from 2 dog xpens joined together. They are 30 inches high. Fortunately, he does not try to jump them so I have not had to escape proof it. The pen is easily accessible for me to clean. The height is enough to keep him from jumping out but is also easy for me to step over.

The flooring is an indoor/outdoor rug. He has an IKEA doll bed which he uses every night. He also has a corner castle and castle tunnel from Small Pet select. The tunnel is his favorite place to hide/sleep midday. There is also a cardboard box hidey house, covered with a baby blanket. He likes to jump on top of this as well as hide under. He's had this box since we first got him. For some reason he doesn't chew this one! 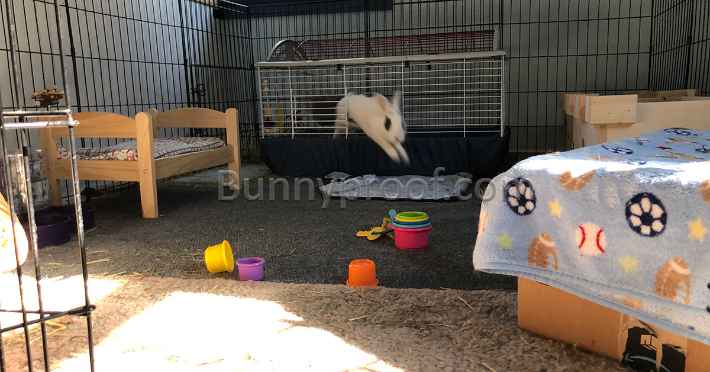 How the enclosure fits into the house and daily routines

This enclosure is in a former studio at the back of our house. Eventually we hope to totally bunny proof the entire room so that he can have the whole thing, but for now he gets free roam time for at least a couple hours in the morning and a couple hours in the evening. Mid-day is his favorite nap time so we don't bother him then. :) I have a bunny cam so we can check on him throughout the day and can go let him out when he's ready.

Some of his favorite toys are baby stacking cups and baby keys. He also loves to bowl when we stack empty 12 oz water bottles.

Advert
Get the Bunny proofing book!

How to bunny proof your home

Buy it on Amazon

Our guides on this subject